Skip to content
Name that Bug! The Japanese Beetle 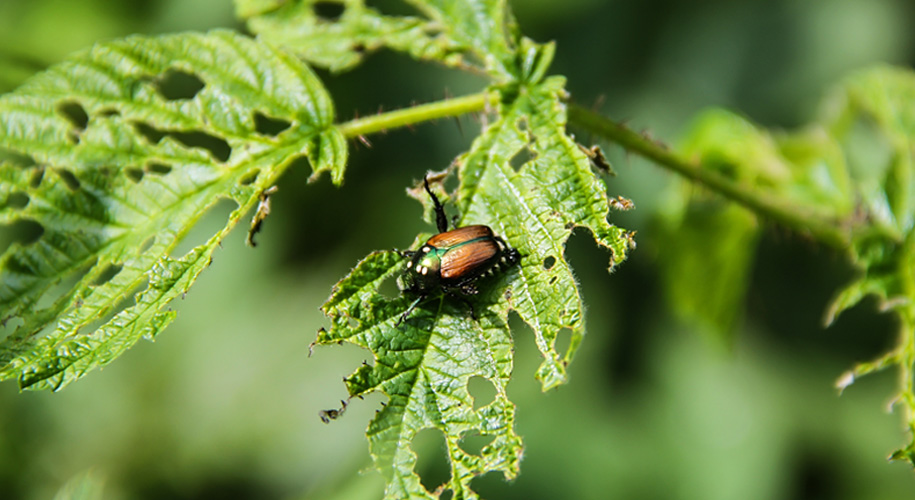 Name that Bug! The Japanese Beetle

Have you noticed skeleton-like leaves or brown patches in your yard? Maybe you recognize the metallic-looking bug in the picture above. If so, you may have a Japanese beetle problem and you would not be alone. This highly destructive pest of trees, shrubs, turfgrass, vegetable, and fruit crops is native to Japan but has become very common in the eastern half of the United States. Unlike its native country where natural predators keep the population in check, this beetle now thrives in the US. Feeding on roots, Japanese beetle grubs damage lawns, golf courses, and pastures.

According to the United States Department of Agriculture, the Japanese beetle is the most widespread turf-grass pest in the United States. Efforts to control the larval and adult stages are estimated to cost more than $460 million a year.

The lifecycle of the Japanese beetle is short but destructive because they cause damage during multiple life stages. Adult beetles typically begin to emerge from the ground in late June and begin targeting plants, feeding on leaves and flowers of 300 species. They feed aggressively, leaving behind skeletonized leaves.

Females burrow into healthy lawn grasses and lay up to 60 eggs that hatch after approximately two weeks. Young Japanese beetles, commonly called grubs, feed below the ground on the roots of turf and ornamentals. As grubs feed, they leave behind brown, dying patches of grass. Additional damage occurs to turf when animals and birds dig to feed on the grubs.

By fall, grubs are nearly full-grown and become inactive when soil temperatures fall below 50°F. In the spring, the grubs resume feeding for several weeks then transition into their adult form and emerge from the ground starting the devastating cycle again.

If you see any signs of Japanese beetles or other abnormalities in your trees, call Titan Tree Care today and talk to one of our ISA Certified Arborists.