Skip to content
Name that bug! The Emerald Ash Borer

In this month’s edition of “Name that bug”, we will learn about the invasive and destructive Emerald Ash Borer (Agrilus planipennis Fairmaire).  Don’t be deceived by it’s beautiful opalescent emerald green exterior, this native Asian beetle is reeking havoc on the ash tree population in North America.  They were first discovered in the United States in Michigan in 2002, probably hiding in solid wood packing material carried on cargo ships or airplanes originating from its native Asia.  As of 2018, it can be found in 35 states and multiple Canadian provinces.  So what is all the fuss about this little bug?  The adult beetles eat ash foliage, but cause little harm.  The larvae, however, feed on the inner bark of ash trees, disrupting the tree’s ability to transport water and nutrients.  Hundreds of millions of ash trees have died throughout North American, decimating total forests, in addition to the hundreds of millions of dollars in costs from municipalities, property owners, nursery operators and forest products industries. 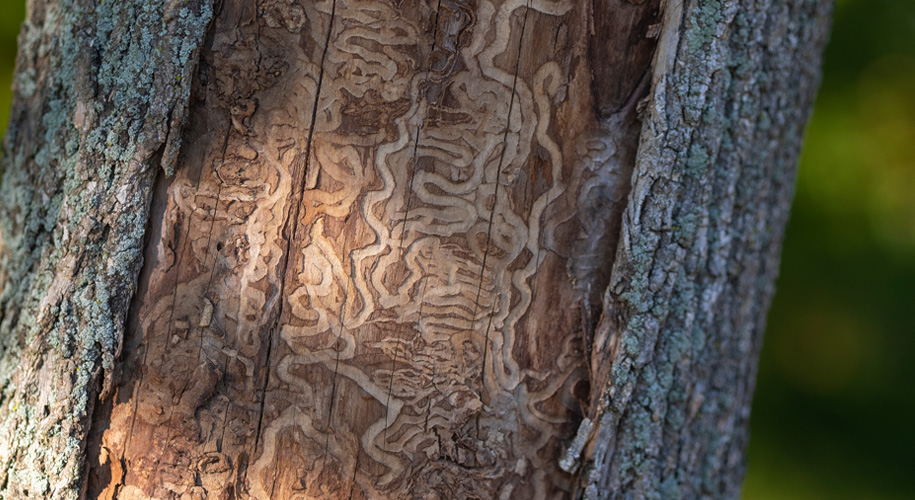 What to look for:

The U.S. Department of Agriculture’s Animal and Plant Health Inspection Service (APHIS) had imposed a quarantine to restrict moving possible infected Ash tree firewood across state lines in an effort to minimize the spread of the insect.  However, according to a press release in December of 2020, the APHIS “is changing its approach to fight the emerald ash borer (EAB) infestation that has spread through much of the United States. The Agency is publishing a final rule that removes the federal domestic EAB quarantine regulations that have proved ineffective and will redirect resources to more promising methods.”

So what comes next?  According to the APHIS December 2020 press release, “The Agency has worked to identify more effective and less intrusive methods and will now direct available resources toward non-regulatory options for management and containment of the pest, such as rearing and releasing biological control agents. Results have already proved effective and the actions announced today will allow the Agency to increase their use.”

If you see any signs of Emerald Ash Borer or other abnormalities in your trees, call Titan Tree Care today and talk to one of our ISA Certified Arborists.